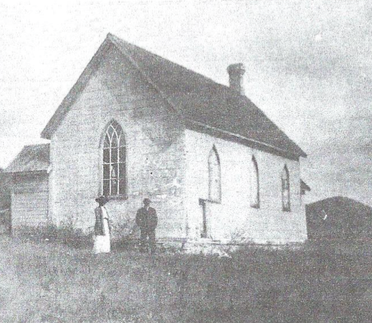 ​Undocumented local history suggests that the first Church of England services to be held in the village of Katepwa occurred in 1884, in all probability during the summer months of that year.  Presumably, a local villager offered the use of his home, and later the local Bonnycastle school house was employed as a place of worship until a more permanent structure was constructed.  Each year with the advent of the winter season, services were curtailed due to the lack of suitable meeting facilities and to severe cold weather.

Commencing in 1885, Church of England service listings were printed each week in the Fort Qu’Appelle newspaper, and thus provide a record of church activity at Katepwa.  On June 14 of that year – at three o’clock in the afternoon, to be precise – the Reverend Daniel Lewis, incumbent of Fort Qu’Appelle, conducted a service of worship at Katepwa.  This service was the first of many to be held on a fortnightly basis throughout the summer and into the late autumn of that year, with the final service of the season occurring on November 15.

In late April, 1886, the following church directory notice appeared in the Qu’Appelle Vidette as a reminder to settlers that spring had arrived and with it the resumption of church activities:

“Divine Service will be resumed at Katepwa on Sunday next, at 11 a.m. in the school house.”

Yet, while the school house continued to provide an adequate structure for worship in the summer, a move was under way amongst the local families – the Bonnycastles, Salters, Skinners and Vidals – to collect money in order to finance the construction of a church.

Constructed by mostly volunteer labour, the building was ready for use a year later.  And, on August 21, 1887, the Lord Bishop of Qu’Appelle, the Right Reverend and the Honourable Adelbert J.R Anson, consecrated the Church in the name of All Saints to the glory of God.

Regular services at All Saints’ Church were discontinued in 1945, after which time the building was used for worship in July and August only. In later years, girls from the Qu’Appelle Diocesan School used to come in the spring to clean up the churchyard and the church. After the school closed, Anglican Youth groups came on several occasions for clean-up and painting of the exterior of the building.

In 1961 the Diocese of Qu’Appelle received a bequest of $6,000 from the estate of the late Ernest Skinner, the income from which was to be used for the maintenance of the church, the churchyard and the ministry. For some years, All Saints had been in the Abernethy-Balcarres parish, but upon the request of a rector of that parish who at the time had the care of Kellinher and Ituna as well, it was transferred to the care of Fort Qu’Appelle-Lipton.

In 1969, Bishop Jackson purchased a residence on Lake Katepwa, where he and his family spent each summer, and thereafter he conducted services in July and August.

As part of a Canada Centennial project in 1967, the R.M. of Abernethy had a fence erected along the roadside of the churchyard and R.S. Rickard had stone gate posts built as a memorial to his parents.

The church building itself in the 60s was in a dilapidated condition, with a dangerous lean, being supported from collapse by wooden buttresses. The building had been plastered on the outside with cement, grooved to imitate stone which was disintegrating. A turn of events resulted in considerable renovation. First, there was the income from the Skinner Bequest. Then suddenly historic consciousness developed in the province, resulting in funds being available for the restoration of historic sites. All Saints Church benefited by both of theses funds. A carpenter was called into consultation who said that he could straighten the building and would remove the chimney, the pressure of which was part of the cause of the lean. He was commissioned to do the work; the building was straightened, the exterior walls were covered with plywood and eventually were painted by an A.Y.M group.

The original finish of the interior of the church was tongued and grooved, which had shrunk, leaving large cracks into which bats crawled to take up residence. Every time the wind blew, dust and debris exuded from the ceiling and the walls, so that it was difficult to keep the place clean. In 1979, the late R.S. Rickard suggested panelling the walls, offering to pay the cost. The effect of this work, plus the varnishing of the ceiling, sealed the walls and ceiling, thus stopping the deluge of dirt. The cross behind the altar was designed and made by Mr. Eduard Koffler, the contractor, as a gift. The altar and the frontal came from the Chapel of St. Chad’s Theological College of Regina after the College was amalgamated with Emmanuel College, Saskatoon. Broadloom, discarded by St. Paul’s Cathedral, Regina, carpeted the chancel and the centre aisle. The roof was re-shingled with cedar shingles. Part of the cost of renovations came from the provincial government, which accepted All Saints as an historic building and the remainder came from the Skinner Bequest and a donation from Bob Milliken. In 1980, a new signboard was designed and made by Mr. Koffler.

In December, 1981, R.S Rickard died, leaving in his will two parcels of land opposite the church to be sold, the proceeds to be for All Saints’ Church. The income is to be used for the maintenance of the church and the churchyard.


The church was recognized as a ‘heritage’ site on Dec 15, 1990. The heritage value of the property lies in its status as the oldest church in the area. The church was built in 1887 by local settlers who used the property regularly for both religious and community events. The building’s architecture is influenced by the Gothic Revival style as reflected in the tall narrow windows with pointed arches and shutters. The wood frame church has remained in service for most of the period since its construction.

The heritage value of All Saints Anglican Church also lies in the prominent nature of the property. Set back from the street and is situated on a small landscaped ground which includes a cemetery, the property reflects a stately nature which distinguishes it from the surrounding properties. Enhancing dignified and distinct nature of the Church are the fence and hedgerow which surround the property.